Every year for Thanksgiving, my husband and I visit his family in Massachusetts for a couple of days. It’s about a four-hour drive. Never one to sit idle on one family trip, I was looking for something to occupy my time.

We’d never sent out a family holiday card, but his family was always very good about sending us holiday cards, and I decided it was time that we reciprocate.

Mind you, this was before we had a child, but our fur-baby made every trip with us, and it was a sort of running joke that she was the grandchild, so we thought it would be funny to create a family holiday card featuring the three of us.

While I have a career in Marketing, I’m no designer. I’m a manager, so I have no training in design programs like Photoshop or InDesign, but I know my way around PowerPoint and I was fairly confident that I could create a custom scene using the tools included there.

I decided to create our first custom family holiday card while on the road.

Okay, it wasn’t anything special, just a basic scene with a few elves playing around, with our heads on the elf bodies. If you’ve ever seen a Jib Jab card or video, then this idea will seem familiar. We thought it was funny, and we vowed that the next year, we’d find something “way better” to send out. We decided to make this our little holiday tradition. While so many families go out and take professional family portraits to send for the holidays, we were going to be the weirdos sending fake family photos.

The next year, my husband was really into it.

He had heard about Krampus, this Central European horned “half-goat, half-demon” creature who, in contrast to Saint Nicholas, punishes misbehaving children. (If you haven’t heard of Krampus and you decide to hit the old Google search, what you’ll find is the stuff of nightmares, so you’ve been warned.) My husband thought this was hilarious. Once again, our families shared beautiful family pictures, and we sent out a scene more appropriate for Halloween. I agreed begrudgingly because our dog did make the perfect half-goat, half-demon. If you look closely, you can see us as two of the misbehaving children towed behind “Krampus.” I should add that my best friend informed me fairly quickly that this was “not going” on her refrigerator. Because I anticipated this reaction, I added a nice photo on the back so that people could choose the side they prefer (but many chose the Krampus side!)

The following year, I was pregnant, and I wanted to find a way to incorporate that into our card somehow.

The search was tricky. I needed characters that I could manipulate to look like my husband, me, and our dog. I decided on a scene with the Grinch, his dog, and Cindy Lou Who at the dinner table. This one was a challenge (again, I am not a designer), but it was also so much fun. I slipped in a couple baby-related elements, just in case “Cindy’s” belly wasn’t obvious. We kept this card up on our fridge for a long time. We were quite proud of ourselves.

At this point, my design limitations made our search for the next year pretty tricky.

I needed to be able to manipulate an image easily, and also select an image that worked well to represent our entire family. This was the first year that I needed four characters to include our son. After testing out a number of ideas, we landed on the Muppets! We found the perfect scene with Kermit and Piggy’s son and Gonzo in the background. I just colored our faces, added some filters, did some creative cropping, and… voila!

Last year, we were again challenged to come up with a card idea, and we had a lot of them.

I thought about so many great movie options but decided to put those ideas on the back burner for future years, when my son would be older. I really wanted to do a Charlie Brown Christmas scene, but did I mention that I’m not a designer? It turns out, it’s actually pretty difficult to make a cartoon character, with simple lines, look recognizable as a real person. After investing several hours into that design, I abandoned it. Then I thought, what about Norman Rockwell? He is famous for his iconic, Americana artwork, and I figured he must have captured the holidays. I did some searching, and sure enough, I found a great image. The only snag is that it didn’t have a fourth character for our dog, but I found a way to sneak her in anyways. The final result, I think, was not too shabby for a PowerPoint file.

So what will we do this year? I’m not telling!

My husband picked the design (for probably the third year in a row), and I told him I was still fairly certain it could not be done. However, I learned how to use the PowerPoint drawing tool, and after spending more time on it than one should… our 2019 Holiday Card is done. Now comes my least favorite part—addressing all the envelopes!

What are some fun family holiday card traditions you have with your family? 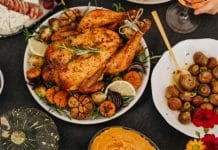 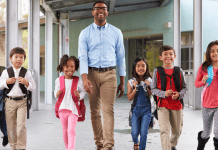 Thoughtful and Frugal Gifts for Teachers and School Support Staff